Rebuilding the lives of former slaves part one: about DataMotivate 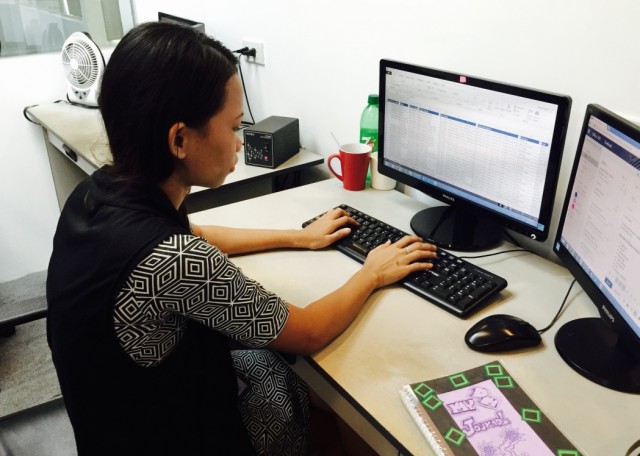 Recently I travelled to Cebu in the Philippines and had the opportunity to spend time with an outsourcing company, DataMotivate, who are making a real difference in the restoration of the lives of girls who have been trafficked into slavery by providing career opportunities. This way the girls learn to become self-sufficient and to build a career, reducing their vulnerability to being trafficked again.

In a three-part series each week I am going to share what I learned from spending time with the team at DataMotivate and the brave and talented young women that they employ.

Datamotivate is working with the rapidly growing offshoring trend and to create work opportunities for young women who have been rescued by non-government organisations (NGOs) from situations where they have been trafficked into sex slavery, or are vulnerable to being trafficked into sex slavery, and give them an opportunity to rebuild their lives through professional employment.

Like any other outsourcing company in developing countries like the Philippines or India, DataMotivate take on simple and repeatable business processes from large scale corporates and complete them at a much lower cost than those businesses can do it by employing administrative and analytical resources onshore. More recently they have moved into web design – they created this website.

The founder, Sam Dharmapala, traded in his career working for a large investment bank 3 years ago to do something more meaningful. He was inspired by an event he attended at the International Justice Mission (IJM) in Manila where he learned about how girls were rescued from manual labour and sex slavery. 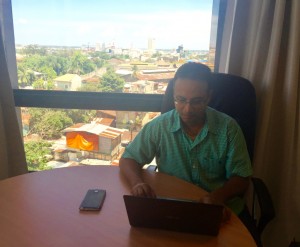 He saw an opportunity to combine his professional skills by founding an organisation that would look to employ these girls so that they can continue to grow and thrive. ‘Our model is to reach out to NGOs who do job readiness training, then take those graduates through our own training. They develop the necessary technical skills, but also to develop a sound work ethic through building character traits that correlate to building a successful life in and out of work’.

A few months after starting the venture he was joined by Tim Surgenor, a former corporate lawyer. Tim had started his own successful mid-size outsourcing company but when he met Sam, he knew he had found the kind of meaningful work he was looking for. “When I met Sam I just knew, here is an idea that is combining my ordinary working life with an amazing higher social purpose.” 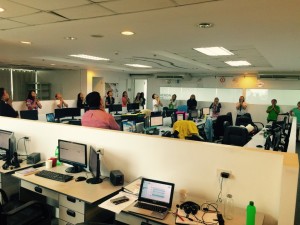 At 2pm each afternoon everyone stops work for a few minutes to do some stretching exercise.

Having been to India and to Bangladesh so far this year working on humanitarian issues in the supply chain, I must say this visit to the Philippines has been so much more heartening. There is a preparedness in the Philippines to prosecute and jail human traffickers and brothel owners who employ underage girls or hold workers against their will. This preparedness may not be quite as strong in other countries where there is an overwhelm of the system or particularly where other cultural issues are at play, such as a caste system. 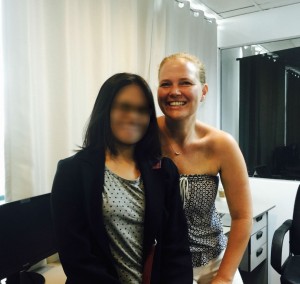 This young lady came to DataMotivate dressed as a boy, having rejected her female identity after her abuse. She is now blossoming back to her former self and working on a long term outsourcing engagement with a global insurance company.

Human trafficking is a global problem. Traffickers prey on the most vulnerable, desperate, and uneducated in poor communities promising them jobs and a better life. But once the victim is in their hands, they are sold into sex slavery or into manual labour. They are held until their purchase price is repaid with interest, however they are paid such low wages that buying their freedom is almost impossible. NGOs play a large role in the freeing and rehabilitation of victims but re-integration again proves to be the larger challenge as the survivors need to be able to build a life of their own, and for this self sufficiency is the key.

Human trafficking is a problem for developed countries as well, as we can often be unknowingly complicit to these practices through consuming goods, raw materials and services produced in developing companies off the back of slave labour. Companies like DataMotivate provide opportunities to companies to use their large scale spend on goods and services to have a positive social impact on the communities from which they do their sourcing. You can learn more about DataMotivate via their website.

*not her real name

Kate is a career procurement and supply chain person, and she uses her in depth experience to educate and inform businesses and consumers across a broad range of mediums. She teaches and contributes to research at Melbourne University, is a freelance writer, and a management consultant for boutique consultancy ‘State of Flux’.

Kate holds a masters degree in International Trade from The University of Melbourne and has had a career as a supply chain specialist working directly within blue chip organisations such as Ford and Rio Tinto and also in management consulting with Accenture and KPMG. Most recently her focus has been on helping clients tackle social issues in the supply chain, and as evidenced by the content in this blog. She has experience first hand working with community groups on anti-human trafficking programs on the ground in India and Bangladesh.

Thursday, 05 September 2019 5 years a slave
Tuesday, 13 August 2019 A survivor, a filmmaker and a CEO discuss slavery and our seafood….
Wednesday, 12 July 2017 Inspiration comes and goes… and then it comes around again

How your stuff is made matters

Trying to research what is ethically sourced and what is not is a mine field. There are three major ethical certification organisations, and these are Fairtrade, Utz and Rainforest Alliance. You can locate the database of products that have been certified by each of those organisations by clicking on the following links: 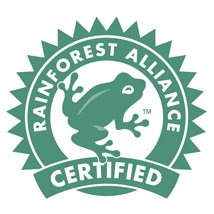 X
Stay up to date with whats happening with the Ethical Warrior!

5 years a slave
A survivor, a filmmaker and a CEO discuss slavery and our seafood….
Inspiration comes and goes… and then it comes around again
View all entries

Stay up to date with whats happening with the Ethical Warrior!